Here comes the time of the great creative redistribution. We are on the verge of an era when artistic opportunities will be available to everyone without exception, regardless of the perseverance or funding of prestigious schools. Artificial intelligence, and more specifically digital neural networks, such as midjourney, which I have been writing about for the past three weeks, are already demonstrating their suitability for various purposes.

For most users of such neural networks, such activity comes down to a temporary hobby. However, some of us have taken this new direction seriously. And this causes a legitimate concern among artists – those who personally create certain works without resorting to the help of AI. Soon, such anxiety can develop into something much more aggressive. 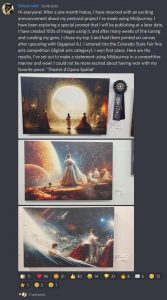 At least that’s the conclusion that suggests itself in light of a recent case that has garnered a lot of attention on Twitter. It all started when one midjourney user created a series of works using AI. He then selected three of them, used Gigapixel AI to upscale them, and then printed them onto canvas.

He presented these works at a competition in Colorado … and won. It took first place in the digital art category. The prize was $400.
And the artists on Twitter are not impressed with this achievement. To put it mildly.

In the past hours, the tweet has garnered nearly 4,000 retweets and over 25,000 likes. There are many different reactions in the comments to the tweet – mostly negative. The winner is called a plagiarist and a cheater. Someone wrote that this is comparable to the participation of robots in the Olympics. This situation is interesting for its philosophical implications and questions about what art is. In addition, this is a direct demonstration that AI still poses a threat to artists. Even now, in its early stages, AI-generated works are able to attract attention.

Yes, there are many moral dilemmas here, from what the AI ​​learns from to copyrighting the results.

We still can hardly imagine how such AI will change lives. After all, the generation of illustrations is only a small part of where such systems will find application. But more on that in a future column.